Sunday Top Ten Things I've Lost That I'd Like Back Please: Still it's Sunday Morning I Miss You the Most

I used to have this map called "Streetwise Manhattan," which I called my 'tourist map,' because I always thought if someone saw me use it in public they might mistake me for a Slow-Walking-Road-Blocking-Bumblefuck (aka a tourist), and so I have this special sneaky way of unfolding it within my bag so it looked like I was digging for chapstick when I was really looking for the closest place to get the V train (P.S: the answer is NOWHERE).

Um, so when my roommate's friend was in town two weeks ago, I decided to spread the joy I receive from this map by lending it to her. I don't think I'm getting it back, and I'm realizing how often I used that freakin' thing. So while I'm wandering through midtown like fuckin' Magellan, I'd like to go over some other things I would like returned to me please.

It's orange. It was my Dad's. On the back it said "Asset."
Last Seen: Manhattan, July 2000
Suspect: Ryan Clayburn. Admitted once to re-possessing it, avoided all further queries on the topic.

9. BOB MARLEY: LEGEND (CD)
Last seen: In The Bravada, The Little SUV That Could, Summer 2003
Suspect: No Leads. In possession of empty case, however. Hoping to re-coop while some stoned asshole is looking the other way.

8. MY ABILITY TO SLEEP AT NIGHT

Last seen: 1988
Suspect: That freaky dude from the movie Willow. Prior to Willow, I was already a bit edgy because of the 1985 film Return to Oz, which is the scariest movie of all time and has these freaky villans called WHEELERS. I used to have nightmares that Willow/The Wheelers would come into my window and kidnap me. 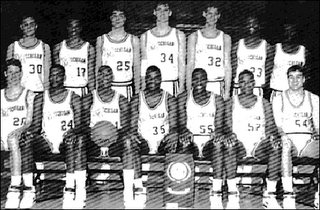 Last seen: 2002
Suspect: My mother, who threw it out with a "big box of magazines" (aka my Leonardo DiCaprio collection) when she moved from our house to a little apartment. 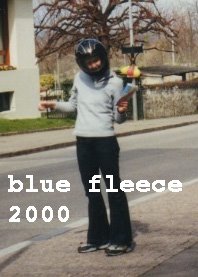 Last seen: Spring 2000
Suspect: Unknown. Went missing along with other key items (see Illinois t-shirt) following my move out of 305 Amsterdam, which occurred under duress after Ryan (my BFF and roommate)'s friend Evan tried to kill me with a blowdryer. In August, Evan tried to kill Ryan with a broom. Where's my goddamn fleece, psycho?!
p.s. check out my hot motorcycle helmet in Geneva in that photo! OW!!


4. MY FUCKING TV-DVD COMBO
Last seen: January 2006
Suspect: Matty, who is currently snoring in my bed. I am going to poke him in the ear. I gave it to him when I moved 'cuz he was bored in his apartment all day (I was being altruistic) and then he gave it away when he moved!

3. PAM HOUSTON- "COWBOYS ARE MY WEAKNESS"
On the left you can see the copy that I no longer have, and I describe why it is better than the other two bookcovers. This is the best book ever, but don't judge a book by it's cover, y'all. 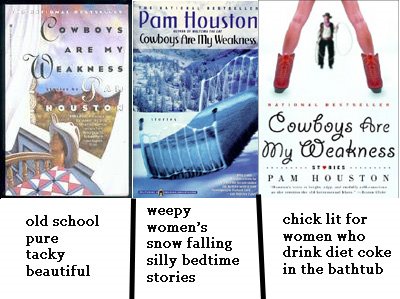 Last Seen: Winter 2000, University of Michigan
Suspect: Samara, my First U-Mich Best Friend and fellow hyperhidrosis sufferer. I lent it to her. I've since bought a replacement copy, but I really liked the old-school book cover on that copy and it's impossible to find now. This original cover reminds me of Jamie Delp's copy, and hers was the first one I read, and it changed my life forever, and I want it back.

2. FROSTED FLAKES T-SHIRT
Turquoise t-shirt, once worn by Lewis Bernard as a shirt-dress for sleep (when he was about three feet tall), then worn by Marie as a hipster t-shirt, then re-born as a torn-up sexy gym t-shirt by Nat. Might look better on her.
Last seen: On Natalie Raaber, 2005
Suspect: Natalie Raaber. In fairness; I currently possess two (2) C+C California tank tops and one (1) three-dots shirt that rightfully belong to NAR which I do not intend to return.
p.s. Nat i love you!


1. STEPHEN BARBARA'S LEAD IN THE "HOTTIES IN PUBLISHING" CONTEST 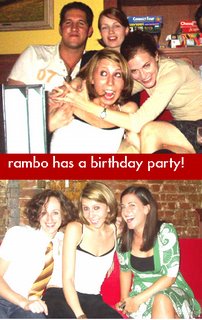 It's your last night to find every computer you possibly can and vote for Rambo. As you can see in the photos, it was his 13th birthday last Thursday, so he really deserves this! Also clearly he is a ladies man--look at all of the hot chics at his fiesta!! Vote, assholes: mediabistro's hotties in publishing
Posted by riese at 3:22 PM

aw...and i get high with a little help from my friends.

I have your Frosted Flakes shirt. It fits Grrrrrreat!