Sunday Top 10: You're Coming Out, I Want the World to Know

The cover of "The National Enquirer" this week promises to tell you who is gay and who isn't. This is an interesting premise (I mean, granted, we're talking about a paper that built it's empire on stories about Michael Jackson impregnating three thousand pound aliens and giving birth to cat babies), which somehow seems less fun than talking about who is giving birth to alien babies. And then there's Perez Hilton, that savvy blogger with the site and the money and the photos, who has been outing people for a few weeks, which makes some people pissed, some people smile, and some people develop anxiety disorders and then lose their mind and then muzzle Kelly Ripa on Daytime TV. Personally, I think it's all a bit silly, because as the Late Great Kurt Cobain said, everyone is gay.

I don't think who Clay Aiken wants to boink is nearly as important as a lot of other things that are being kinda-sorta covered up right now. And Jodie Foster? Really? Really! You don't say.

SUNDAY TOP TEN: THEY'RE COMING OUT, I WANT THE WORLD TO KNOW 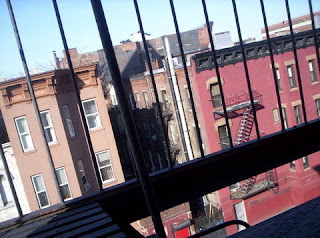 This is the view from my ex-East Harlem apartment on 115th street, where Krista and I set up our happy warm hardwood-floored home from September of 2004-January of 2006. Our block was really quite lovely, except for the morning that Krista stepped over a dead person on her way to the train and called me in a total state.

East Harlem itself lacked many things (a place to buy tampons after 11pm, a safe street at night from the subway, a good grocery store, fresh-direct east of First Avenue, food delivery from a various international locales besides Mexico, China, and PizzaLand, an office supply store, a reliable crosstown bus), but East Harlem if you like that kind of thing is a fantastic place to breathe and walk in this city, because it has a life and culture that the East Village no longer has (in case you count twenty-year-old girls whining that they didn't want avocado in their Soosh-aaahy while wearing $500 sweatpants as "a culture"), but don't sign the lease for that $700/month steal expecting Mimi Marquez to come barreling down the street in hot pants and beg you--you the melancholy former junkie/musician from Scarsdale-- to come out tonight because her "body's talkin" to her and her body is saying "time for DANGER," that it wants to "commit a crime," "be the cause of a fight," and "put on a tight skirt and FLIRT with a STRANGER!" So you know, take your striving back to Williamsburg. If you like: 1. Goya products, 2. A street fair for the entire month of July which means Elephant Ears and flying children, 3. The frequent opportunity to purchase four neon pink thongs for 4.99--go to East Harlem. But there is no Angelica's Kitchen, no hypothetical Live Cafe, no Tunnel nightclub, no cute girly boutiques that advertise in Bust magazine, no lesbian mystery bookstores and no Nyuorcian Poets. And there ain't gonna be, you "young professional" you.

Also, it's really far away.

9. Friday Night Would Like to Come Out as Thursday Night, and vice versa: Call me crazy, but I think Friday night is the absolute best night to stay in and clean. Why? Because you can watch "The N" (new episodes of Degrassi and South of Nowhere) while you wash dishes for 1.5 hours, and you are tired anyhow and it's hard to deal with people after a long work week and because also:

"Why not make your life easier? I mean, life is so fucking hard, even when it's easy." (Margaret, Six Feet Under)

Thursday night is the sexiest night of the week. So just do what you wanna do then. Everything is too crowded on Friday night.

8. Meeting for Lunch would like to come out as Eating Not Just a $10.75 Plate of Mixed Greens and Petrified Grilled Chicken, but as also Eating Up Your Whole Goddamn Day.

7. Drew Barrymore Would Like to Come out as Thin. 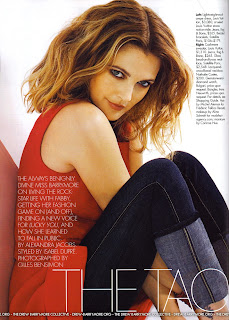 Why is she continually held up as an example of a woman who is "voluptuous?" I saw her once and she is the tiniest thing ever. Not as tiny as Shane, who is SO much thinner in person than I ever even imagined which means that Sarah Shahi must be like, ridiculously tiny too (like Drew Barrymore), and y'all need to eat a sandwich, all of y'all.

6. College Degrees Would Like to Come Out as Relatively Useless Pieces of Paper: However, it remains a less useless piece of paper than a high school diploma. So you know, study kids, (sound of whip snapping), children, I said study!

5. Jennifer Lopez would like to come out as a Replicant.

Seriously, why is she on the cover of every magazine all the time? The thing about J-Lo is that she has done a lot of things that are very pleasant and entirely forgettable. Aside from maybe Selena (which I didn't see) and that music video where she's almost naked with that pole and the shimmery gold costumes or something, I can't credit her with making any great contributions to the artistic universe. Except for her ass. Oh and I heart her lingerie line.

I'm not even gonna talk about Gigli, because at least that shit was so bad it was memorable. I'm talkin' about Shall We Dance. About Maid in Manhattan, Jersey Girl, The Wedding Planner, Monster-in-Law.

Anyhow, she's on the cover of Harper's this month. Second time this year. I'm just sayin'.

What did she do this time? Is she going to say something cool in her interview really? I mean, Angelina Jolie gives a good interview. J-Lo? Really? When I see her on the cover of magazines, she always is airbrushed so much she hardly looks like anyone at all. Which is why I, on behalf of Bladerunner, must let you know that she is not a real person, she is a replicant.

4. I AM: The Girl Who Stepped On Your Feet, Ran Into Your Century 21 Bag, Elbowed You in the Face, etc.
That was me. Yup. I'm actually totally over it. This is a crowded city, you gotta hustle.

3. The Following PlayList would like to Come Out as the Only Thing For Grey December:

2.I'd like to out myself and most of my friends as not having it all together.

That's right. We are all a huge mess. Standing by the door last night, on my way out to make a mess of things, I looked at two friends and said "We're a sad bunch, aren't we?" and I said "I need to get ready to go out" and she said to me: "Don't go out there. Things get worse out there, in the world." 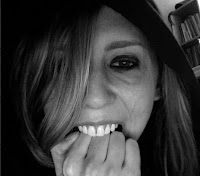 What are we doing, where are we going, we are striving like monkeys following dreams that look like bananas and we're happy to see you, or maybe just pretending we are. We are trying, this is our time at the edge, we even carve out little pieces of this imaginary online universe to tell each other who we are without getting reactions right in our faces or our ears, so we can control somehow the output, the image, the response, the reverb. This is our time at the edge? 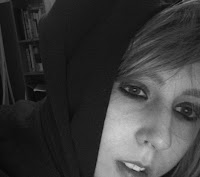 1. I read something really beautiful today in the form of a short essay by Brian Doyle in The American Scholar, as reprinted in The Best American Essays 2005. I luckily found the entire essay transcribed here and you should check that out asap. If you are too lazy, here is just the last paragraph from Joyas Valadoras:

“So much held in a heart in a lifetime. So much held in a heart in a day, an hour, a moment. We are utterly open with no one, in the end--not mother and father, not wife or husband, not lover, not child, not friend. We open windows to each but we live alone in the house of the heart. Perhaps we must. Perhaps we could not bear to be so naked, for fear of a constantly harrowed heart. When young we think there will come one person who will savor and sustain us always; when we are older we know this is the dream of a child, that all hearts finally are bruised and scarred, scored and torn, repaired by time and will, patched up by force of character, yet fragile and rickety forevermore, no matter how ferocious the defense and how many bricks you bring to the wall. You can brick up your heart as stout and tight and hard and cold and impregnable as you possibly can and down it comes in an instant, felled by a woman's second glance, a child's apple breath, the shatter of glass in the road, the words ‘I have something to tell you,’ a cat with a broken spine dragging itself into the forest to die, the brush of your mothers papery ancient hand in the thicket of your hair, the memory of your fathers voice early in the morning echoing from the kitchen where he is making pancakes for his children."

I enjoy this post... your commitment to the Sunday Top Ten... and the fact that I can now spend a good portion of my work day reading old Sunday Top Ten posts.

I find in this crazy world that a weekly writing assignment is reassuring, like a warm glass of milk.

Thanks for being a fan.

Yeah, after you stepped on my foot you knocked my Century 21 bag out of my hand...bitch.

Awesome post. (And if you'll allow me to geek out for a moment, though aren't you the one who transcribed half of Rent - Mark's the one from Scarsdale.) Okay, carry on.

Sunday Top Tens make me happy. But todays #1 made me indescribably sad.

Automatic,--That is an Outstanding Sunday Top Ten, the last two on the list made me think introspectively, so thanks for that.

Balderdash...I'm sure you were okay once you got home and put on your forty-dollar pair of Paper Deniim & Cloth Jeans!...HOLLA

Jamie...fuck. i kinda suspected that as I was writing it, but rather than verify, I just figured no one would you know, correct me, necessarily.....

I hate to be a Jennifer Lopez apologist, but “Out of Sight” is really good. You should see it again for the first time.

Brian Doyle's a huge favorite of mine. Thanks for pointing out the new essay.

Sorry to be the music nerd of the commenting bunch, but that was an outstanding Grey December mix. Extra-special bonus points for the inclusion of Leonard Cohen AND Tom Waits; two men who practically live in my stereo during the cold months.

anonymous, i feel like we are developing a really special relationship, you know? hmmm

clinton: no need to apologize, thanks!

kneecapped: no need to apologize...hm, yes, out of sight, i have heard good things of that one....i kinda don't like violent movies. i know. i so am not qualified to speak on anything cinematic.

Umm if I'm not mistaken Sarah Shahi is Arabic not hispanic. She is the daughter of Arabian royalty or something. I totally agree about the voluptious thing AND I live on 115th between 1st and pleasant and see that building everyday of my life LMAO