Channukistis Wish Lists: If I'm Gonna Go Down, I'm Gonna do it With Style

I wasn't going to do this, but I think I have to. Mom claims not to read the blog (except, oddly enough, when I "joke" about stealing her Xanax) which she says is because she respects my privacy (let's take a moment for the concept of my mom respecting what millions thousands hundreds of people read every day when I ask them to. OK. good. thanks. moving on.) I think it's mostly because she still has dial-up, and I could probably take the M14 bus to South Ferry and back before her computer would load all the snazzy graphics employed on my wild little corner of the webbernet.

Like stock photos of "lesbians" with bows on their coochies for the "holidays/celebrations." (see image, right)

Okay so: last week I had a fleeting thought like this:
"Wow. My life is going really well right now. I am so lucky to have these people in my life, I'm making progress in so many areas, I love my life! " and then: "I feel too good for this to ever really last."

So obviously a few things have fallen apart since then.
So you know, what have I got to lose? That's right! My family!

When I was a kid/adolescent, we always put holiday "wish lists" on the kitchen door. These lists tended to easily spawn into spirals of absolute futility, as Lewis and I, the young and fundamentally ridiculous people that we were, found it endlessly amusing to clutter our requests for Abercrombie Jeans (me, 96-99), Pirate Legos (lewis, late80s-mid90s), Tommy Girl Perfume (me, 1997-->), Sim City 2000 (both of us, 92-94), Boyz II Men CD (me, 91-93) with the standard: Porsche, Sega Genesis, A MILLION DOLLARS!, a pony, a puppy, a VCR, a trip to Puerto Rico, a HARLEY DAVIDSON!, a date with Leonardo DiCaprio, etc.

Now we do wish lists via e-mail. Though my Mother sent an e-mail containing the desires of herself and her wife (My Other Mother) about a week ago, to which I responded promptly with my Amazon Wish List ...

it took me 'til now to really look at their list and consider it.

I'm crossing my fingers that they will think it's fun to laugh at themselves too, just like I do. I'd be willing to provide a long list of times I have made fun of myself. (see archive, left hand sidebar)

Cutlery Set with Steak Knives
This is really nothing compared to what's coming up. But I think this would be a funny item to buy in New York and bring on an airplane. Also I recall being told that those CutCo knives we bought in '98 would last forever. Forever never seems to be around when it ends, eh?

No Batteries Flashlight/Lantern
What's going on? Really?!! A flashlight? What's next...you want a can opener? Some twine? I think it's my job as the starving artist to ask for things like flashlights. Is there a spelunking expedition in the future? A possible tornado? A stock market crash?

Queen Size Flannel Sheets--no flowers!
Again with the what-an-exciting-gift thing. I guess she did ask for socks for like, five years in a row. Maybe she doesn't trust me to pick out anything special or complicated. What's going on here? I tend to feel people are best at picking out their own sheets, especially when they're telling me to avoid florals. Jesus. What then? Trucks? Solids? Calico? Calico is a flower. My sheets are patterned with bleach stains, and I like that. Something about this feels uncomfortable to me.

Anyhow, I think these are really sexy. I found them at The Lesbian SuperStore L.L Bean.

But if flowers are really gonna kill the mood, how's this: 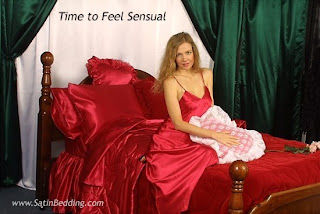 Beading How-To/Starter Set
Can flowers be involved in this one? Is beading complicated? What is beading? Can I get you a 'starter set' without a how-to? Will you know how to start without the how-to, if you just have the starter? What comes after the starter set? Will you be able to bead what you need to bead? Will I get you started but not teach you to fish? Are you going to bead things? Like flowers? What's going on? Whatever happened to Fimo? Fimmooooooo

This is problematic on a few levels. The first is that I know my mother is sitting there at home with the AppleWorks program that came with her Mac (WHY DOESN'T MAC COME WITH A GODDAMN REAL WORD PROCESSING PROGRAM? THIS IS HIGHWAY ROBBERY AND IT NEEDS TO STOP) and she's annoyed that it's ancient and not compatible with other computers made after 1996. However, attempting to solve this problem with MacWord is a bit troubling. I think she means Microsoft Office for Mac. It's okay, Natalie thought The O.C was a channel.

Gas Card
That means a like, gift card to a gas station. Where you put gas in your car. Nothing says "I love you" like 10 bucks at Texaco.

Sharper Image Digital Dashboard Compass & Weather Station-CE352
HOLY CRAP. Gas Card, Flashlight, SHEETS...and now you're busting out with not only a brand name and a specific store, but an ITEM NUMBER?! I haven't even begun to imagine what on earth this gadget is, though it is from Sharper Image and thus I imagine it massages something or perhaps plays jazz in the shower, but I am absolutely getting one for myself, it sounds very useful, how specific, how dynamic, I mean, wow, really, wow.

Another Copy of that Great CD Marie gave me last year that I've lost.
Aw, Mom! I love making CDs for my Mom, because she granted me many musical gifts as a child, including but not limited to: David Bowie, The Beatles, Carole King, The Indigo Girls, The Who and Raffi. So I can give her Nellie McKay and Martha Wainwright, or something. A woman can only listen to so much Dixie Chicks.

Okay, since My Other Mother and My Mother have only been married for 2.5 years I don't know if I have earned the right to make fun of her yet, but if I had, I would absolutely point out that it is amazing, and in another context would have struck me as clearly a tongue-in-cheek request, that she has requested a:
Lawn Tractor,
Reciprocating Saw,
and "other cool toys/tools."

If you don't know why this is funny, I'd suggest you treat yourself to a little lesbian humor. It doesn't mean you're a lesbian, it just means that you think it's funny when lesbians make fun of other lesbians. Like, about tools. And stuff.

The "for both of us" list includes only three items:
gas grill, snowblower, canoe.

"We're not getting a canoe, because then they are going to want me to ride in it."
-Lewis.
Wait one more thing ... tool/toy? Sheets? Flashlight? Just putting it out there.
Posted by riese at 11:23 AM

Labels: 90's nostalgia, drug reference, family, natalie, near mental breakdown, other people in my family have jobs i swear, riese has two mommies, the apple store

hmm...maybe I should get them that madonna sex book. no, i kinda want that for myself. hm. suppose it would be at least as fun as the authors copies of erotica anthologies i unload on them when i come home for the holidays.

"Wait one more thing...tool/toy? Sheets? Flashlight? Just putting it out there."

Well, at least you left the beading set and CD you made out of that one. That could have made it real awkward... real quick.

Maybe they want the dashboard compass so they can participate in a weird midwestern hobby I've just learned about called geocacheing where you drive around looking for some location that has "booty" stashed there. http://www.geocaching.com/faq/

which could also explain the flashlight, the canoe, and the gas card.

well they did just buy a house in...

wait for it...ingrid...close your eyes and think about a girl named after a month that we both know...

ok, this looks really cool though. I'm glad that they pronounce it like cashing a check.

Um, if my Moms really are doing this, I would freak out and move to Grayling and do it with them.

Wow. It's almost like you're actually (in the realm of the serious here, no sarcasm) right about this...

i'm all about the sharper image gift...no idea what it is but sounds cool. perhaps i'll pick one up for my father. thanks for the idea! :)

I think the best gift my mother ever got was a cordless power drill. She was thrilled, and she showed it off to me for like twenty minutes. Except it's very possible that she actually bought it for herself and Mark was just there wishing he'd known to think of power tools as the gift that will really rock her world.

I would love to be right about it.

Fucking Grayling? Unbelievable... I think that your old bestie might still be living there, in all seriousness. Maybe I got that from MySpace? I don't know.

this post has nothing to do with performing oral sex while wearing a tuxedo.

Lozo apparently you have never met my Moms.