that time i took photos, often outside, far away from computers

First Alex drove me to the airport from New York City after everything got packed all in a hurry.

Then I flew to Detroit and my Mom picked me up in the airport and took me back to her apartment which felt familiar and nice even though I'd never been there before.

On October 1st Interlochen, my boarding school, was hosting its class of '99 reunion and so my Mom drove me to Kalamazoo and then Ingrid and I drove upstate to Interlochen and everyone was there.

I went away to boarding school for my last two years of high school. My Mom and I were fighting one night and I wanted to say something dramatic and so I said I was going to boarding school. I don't do things like that anymore.

So it was good to be see faces that have only changed a little bit and people fully intact. We changed I think, for at least a little while there. Or maybe we just did that thing you do where you have to put on certain personalities for someone else because you've always suspected there's something inherently unwired and abnormal and unacceptable inside of you and you have to at least give it a try -- to be something other than that.

Maybe I am just speaking for me. Maybe everyone else kept it all this time but regardless we all got it back.

Sarah says, you know I'm supposed to say how we all have changed but we haven't. Delp (our writing teacher and surrogate father) said, the craziest thing is that you all look exactly the same. Then I said no I look haggard and weathered and I think I want a face transplant and everyone said the thing they always say about how dumb I am to say these things.

See Interlochen was a place where I felt authentic. Somewhere in the woods, there's a center in me I am simple without. Most people have places like that, or I hope they do. 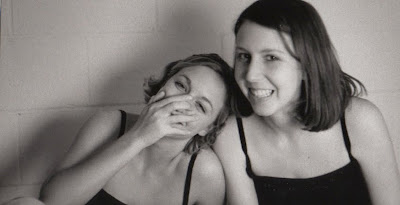 When I first got to Interlochen I was fifteen and sad. I was catastrophically sad. I was sad like a person who doesn't think sadness ever stops or changes and then it did. I left boarding school liking things I'd been discounting for a while as overly sentimental and more importantly too painful to lose at the end: friendship, poetry, the apple fritter things they served at breakfast. 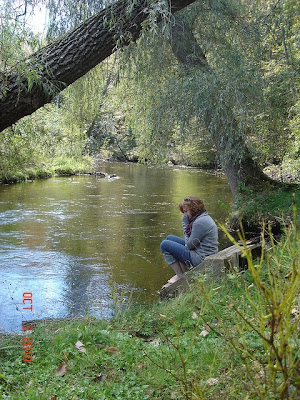 On the last day went to Delp's new cabin. Everything felt peaceful. I was with Meg and Ingrid and Sheetal and Delp and everything felt right.

When people asked me what I was doing I told them about Autostraddle and everyone said they liked it or was impressed that I get to do what I get to do which is write, and work with other writers and edit and have ideas and be creative and work with other creative people, which is the thing I was doing and the program I was in At Seventeen. Unlike every single other person I've talked to about my work, not a single soul at Interlochen asked me how we make money (I'm amazed, honestly, at how f*cking tacky people are sometimes). It was just good.

Then we drove back and then I was at home with my Mom. She was really nice to me and made sure I had everything taken care of before I left, like my teeth.

Then I got on an airplane and the airplane landed in Oakland, California! So far away!

From there I did not use my technologies, except for ordering pizza. bcw and I looked at a map and a travel magazine and decided to go to wine country because there's an attraction there which promised famous fainting goats. If you would not drive 1.5 hours north on the West Coast Highway to look at fainting goats then I don't know what to say for you besides I'm sorry.

See two French children hugged and then the geyser exploded. It only explodes every 45 minutes.

Then to the big castle we saw out the window which was a winery also by this rich man who wanted his own castle. So we drove up there and conducted additional photoshoots in the spirit of fitforafemme. Eventually in the future you'll probs find out what we were wearing on her website.

Also later to Twin Peaks to smoke and look at how big the whole world is and how we were smaller then. I could see everything, even through the clouds & fog afterwards which will always be there, sometimes. There's nothing a person can do about it. Sometimes you just have to get through it, and grope in the darkness and remember earlier how the sky turned purple and you were glad to be here.

We are reading Inferno for Autostraddle Book Club
Sunday came and wasn't the best day ever for some reasons so we sleepwalked through Alcatraz where we learned that men are powerful and they know how to control other men, especially the bad ones. Then there was dinner and then I went to Taylor & Kelsey's and we had wine and later me and Kelsey got sick. All of these things were fun however except the sick part. 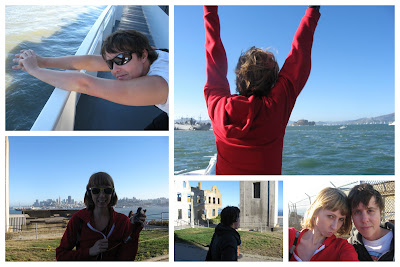 Everyone ran Autostraddle without me quite well, even if Laneia was driven slightly crazy by the task. Let's be real, we're all crazy already otherwise we would be at Buffalo Wild Wings right now.

I'm at Taylor and Kelsey's new apartment in Oakland. It's nice to be here with them. I usually hate crashing but this isn't a crash so much. It's a landing or something, although temporary.

Sometimes I get super scared and most of the time I just try not to think about scary things and instead think about things that make me laugh or smile.

On Sunday my grandfather died and now it's Wednesday and I am still scared to call my Grandmother because I don't want any of these things to be real. I call but it rings and rings.

I just want an audio tour of my life in a foreign language I don't understand, and someone who can translate it for me.

I just want to get into a space where maybe I could stay for a while, lying on the kitchen floor reading Inferno.

I feel relaxed and the sun goes down behind the buildings every night.

When I get a place I will feel better. I know there is fear underneath my ribcage and my stomach and all the other parts. The visible parts. I am lying on top of it, smiling and eating tomatoes.

New York City is a hard place to live. To fight all the time for a small patch of overpriced land. I love the city but the living was hard, and at some point it wasn't worth it. You fight against unspeakable strange malice every day at least a little bit, you go somewhere overcrowded or get elbowed on the train or you are forced into an overpriced cab ride due to emotional circumstances of some kind which are making you feel bad enough, thank you very much, city, I do not need that expensive cab-ride in my life when I am so sad or mad or in a hurry.

So I feel good, I think. I'm behind on all my work. I just read two pages of Inferno and looked through my bag for chapstick, which I couldn't find, and then i thought my phone was blinking but it was really just this mobile Virgin web thing I had to get.

I got ice cream, I want a treehouse.

I feel like everything is about to change for everything, even you, I said in the car.

I just want to do things when I want to do them and most of all help people. Is what I want. I need you to trust me on this even though I seem so far away. Not geographically but like in my brain. I am. I mean, that's exactly it. How I want you to be happy.
Posted by riese at 6:10 AM 25 comments:

Labels: california, if i don't let myself be happy now then when, interlochen
Newer Posts Older Posts Home
Subscribe to: Posts (Atom)