My So-Called Lesbian Lover: Why Shane is the New Jordan Catalano

In honor of tomorrow's Season Four Premiere of The L Word, I'm posting an essay I wrote for my nerve intern application about two years ago. I tried to update it a little to reflect the unfortunate circumstance we know as "Season Three," but then my eyes started to hurt. Hopefully it still makes sense.

"My So-Called Lesbian Lover: Why Shane is the New Jordan Catalano"
I hadn't seen anything like her before and I just couldn't stop thinking about her. I also couldn't believe it had taken me so long (ten actual months since the premiere on Showtime) to Netflix the first season of The L Word, which I had done on a whim so arbitrary that I can't even remember what small shred of desire shaped that whim to begin with. But after that first week of compulsive viewing of the entire season, there was nothing whimsical about my all-consuming obsession with Shane "I don't do relationships" McCutcheson, the androgynous sexy sinewy smoky-eyed woman who fucked with abandon and broke hearts like I break wine glasses.

I confessed to my roommate and viewing partner, Krista, that my burning desire for Shane, reflected by my new Shane-influenced fashion sense (vintage rock t-shirts and paper-thin sheathes of men's wifebeaters, no bra, distressed jeans just barely hanging on bony hips), was ruining my relationship with my boyfriend (he liked me being mostly hetero and wearing yoga pants). Krista felt the same. Like teenage boys with Brooke Burke posters and Brittney Skye DVDs, we shunned the girls from our class and mourned the impenetrability of a fictional character, the sweet wet dream that is yearning for the non-existent. “You know what?” Krista asked me, staring wistfully the television screen, which was dutifully re-playing our favorite Shane-Cherie sex scene--“I haven’t felt this way about someone since Jordan Catalano.”

Like all daughters raised by feminists in the “Free to be You and Me” generation, Krista and I had never plastered our teenage bedrooms with glossy Kirk Cameron posters from Tiger Beat. My first star-crush, I believe, was for the Hard Day’s Night- era Paul McCartney. Star crushes were for lonely teenagers in square-shaped states who's parents subscribed to TV Guide and still had the Friends finale on VHS. We were above all that, so when someone manages to penetrate our countercultural hearts, even now, in our mid-twenties, they hit us hard. Over the years, only a few men and women have emerged from the airbrushed pack to assert themselves as Worthy. 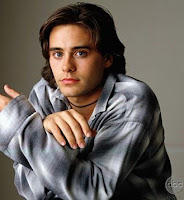 These are characters with on relatively well-written shows or movies, though they were often too mysterious to speak many lines, well written or otherwise, themselves. Characters who to us, seemed real enough that the unavoidable fact of their non-existence was nothing short of heartbreaking.

We want to make love to these characters. We want to slide underneath their smoky exteriors and watch them sleep. We want to extract tales of their troubled childhoods like organs, and then dress ourselves in them. We want to strut down the hallways of our mind-numbing public high school or through the catty girl-clubs of West Hollywood with people so potent that you get wet just looking at them. Or, as Rickie from My So-Called Life (the vehicle for aforementioned Jordan Catalano) would say: “You’re so beautiful, it hurts to look at you.”

What Jordan Catalano had, and what Shane has, is casual sex appeal. It is possible to theorize that Shane is a grown-up Jordan, and Jordan is a budding Shane, but no one could possibly claim that, at the age of their capture, the two have similar personalities. Their only similarity—which cements their mutual ability to sneak into our conscious and unconscious dream-life—is not simply being good-looking, but being the right kind of aloof.


Continue reading and comment on "My So-Called Lesbian Lover" At Automatic Straddle...
Posted by riese at 12:51 AM