Orange Hair and a Broken Computer: Be Proud to Be Out of Your Mind and Out of Control

Seriously, the fact that I am still alive is an actual miracle. As an actual scholar/Rabbi/theologist said (a.k.a., not Ani DiFranco, Angela Chase, Lainy, Lewis Jacob Lyn Bernard, Me, etc.):

"Just to be is a blessing. Just to live is holy."
(abraham heschel)
I'd like to make that statement on my behalf and also on behalf of Sparky McStanostien, my Jewish computer.

So, my reading rainbow friends, lets hop an overpriced gypsy cab with Marty McFly and do a little backwards-time-thing, like they did in that movie Memento. (I own that movie on DVD, bitches!! It's on my shelf. That's how visitors know I'm smart, which is why I'm a PIMP.)

4am, Wed. June 21st:
I'm totally in my room right now, and I totally just tore apart my room when I was having a mental breakdown. And I'm ON MY COMPUTER!! I put in new memory, too, so it's like greased lighting.

2am, Wed. June 21st:
I was inside a brand new space-station on 57th street called The Apple Store. I've spent many tortured hours at the Soho locale of this popular spot for Whiners (e.g., Tourists carrying cracked laptops in paper bags, scrawny models with dysfunctional iPods covered in crack) and People like me (People With Real Problems with like Actual Goddamn Computers).

I must say--the 5th avenue store at 2 A.M. was not only serving as a recording and gaming studio for many of the city's intellectual elite (and by that I mean--rascals!), the Genius Bar had a total wait time of--um--NO MINUTES!! WHAT??!!

First my computer didn't work. Then he hooked it up to something. This is how that went:

(I look over his shoulder as he reads the following exchange on a post-it note on my desktop:
Plaster: he wants to give us X and watch us fool around
Nads: yeah, who doesnt
Plaster: good point
and then this one:
"You know what I could do? I could become a shop teacher. Teach all the retarded kids to make birdhouses." (Matty))
Him: Um, nope.
Me: I'm just trying to gauge your like--weirdness factor.
Him: (Gives me a look that says: Woman, I work at the goddamn genius bar. You wanna talk weird? How about the fact that in ten minutes I'm going to have an actual conversation with another so-called genius about why I'm wearing pants instead of shorts and the reason will be that I was too lazy to put on a belt.)

OK, but seriously: he totally saved my computer. It took about two hours. I pranced around the Apple Store, wrote emails, and felt like I was going to pass out from hunger and despair.

11:30pm, Tues. June 20th:
I am on Haviland's bed, on my--I mean her--new MacBook, trying to find a solution to the fact that my computer won't turn on. She's being super nice even though I am crying, screaming, and moaning in despair, which is Not Hot.

10:30pm, Tues. June 20th:
I arrive at home after a nice evening, proud of myself for getting home early to write some storylines for a project I'm doing with J-Nads. Buzzing with ideas to send to J-Nads, I try to turn on my computer.

I see a folder. A question mark. A blue screen.

I proceed to lose my goddamn mind.
(Sub-note: my phone was about to die, and I'd left my charger at work.)

2pm, Tues. Jan 20th:
I stride out of the salon on Madison Avenue, blonde hair glistening in the summer sun: I am poor....but beautiful!

10:30am, Tues. Jan 20th:
Me: "Janet, just tell me what you think, honestly."
Janet: "Marie, anyone who told you that your hair looks good is trying to sabotage your life. You look like--like--a shiny copper penny! But it's not even like, even!"

11pm, Mon Jan 21st:
Lo comes home to look at my orange hair. Well, ok, I call Lo and tell her she has to come home and look at my orange hair. She tells me it's not orange. Not orange is good, but I'm looking for STUNNING. I'm also IMing Lainy (who rocked the MCats), Haviland (ALASKA!), and J-Nads (my partner in impending fame.) 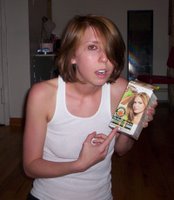 Here we see me with orange hair. YES.

9pm, Mon Jan 21st:
Since I've already had such a fantastic day, I decide to do something fun and different and dye my hair blonde. Anyone who knew me between the years of 1993-2004 are aware that this is a judgement call I am prone to executing at relatively improper moments. Some highlights (no pun intended HA HA):

July 27, 2003 (from my ex-livejournal,ohhowgooditwas): I'm still wearing the hospital bracelet, after 3 maddening hours waiting for someone to tell me why my neck is red and my ears are swollen, which is, of course, because i tried to highlight my own hair and then, when i failed, decided just to die my whole head dark brown. which people seem to like, but i miss being blonde, although in some way i like being terrible. which is what i think of myself when i look in the mirror these days.

July 30, 2003 (from my ex-livejournal,ohhowgooditwas): hair disasters are over. i submitted to the hands of my hair-goddess, nicole, and now am v.pleased with short blonde hair. she reccomended the short part because most of the long stuff was pretty much destroyed. by me. and it would be better to get rid of it. i feel like i'm 18 again, with short golden hair and no meat on my bones.

December 21, 2002 (from my ex-ex-livejournal, veronicap): bad experience at hair-ladys at the mall. she messed up and then she (tried to) fix it. i thought that she had fixed it. after rewarding myself with a vanilla cream frappuchino and an overpriced t-shirt (i had a coupon!) because i endured 2hrs of hair color mistakes, i went to the bathroom and realized that my hair was gray. just the front, but arguably the front is the most important part. which means that *gasp* the starbucks slave AND the goofy gay guy at express were thinking *does that girl know that her hair is not only too short but also grey???*

i called chris and he told me i needed to go back and demand to be fixed. i told him that going back and asking for things from people that i gave money to made me feel like i was that old lady at wal-mart with the fanny pack who tries to return the loafers that she already wore. he said it's not like that, at all.

so i'm no longer greying, but i'm still somwehat confused about why i had to give someone 90 dollars to make me look worse than i used to.

humph.
i am goldilocks.

got hair fixed by miracle-worker at marshall fields. worked a lot.

going to do great things some day.

Also worth noting: in the Traverse City Mall in 1998, Ingrid Greenfield and I mis-identified my hair color and I ended up with a head that was half red and half blonde. We then dyed the whole thing black. I didn't have to pay though.

7pm, June 20th:
I am walking on air! ACTUAL AIR! Hav calls to say an audience member she spoke to at her play reading that afternoon "loves Marie Lyn's work"! (My work?!!!) "Just though I'd brighten up your day a little," she says. HA! As if my day could get ANY BRIGHTER.

5pm, June 20th:
Lo calls with a story about a transsexual that made me LOL, but I can't talk about it here, cuz it's for Ladies Only.


10AM, June 20th:
I find out that I get to go with Haviland on Rosie's Cruise to Alaska. I almost have a heart attack. I'm not kidding. I literally tremble with joy.
Posted by riese at 4:01 AM

I heart cruises esp. ones to Alaska, although watch out for lesbians if you're a dyke-magnet like myself.

oh, we're hoping to meet some amazing power lesbians who will take us on helicopter rides in the mountains. and by helicopters i mean kyacks. and by kyaks i mean expensive wine.

Ok, it was dark, the lighting in our place was dim. I'm sure in the light of day I wouldn't have said it looked "not orange" and I wasn't trying to sabatoge your life. But just for the record..this is coming from someone who had orange highlights for the better part of their college experience and was in denial still calling them red streaks. Everyone knows that red fades to orange in like two shampoos. But seriously. I have photos. One is my header...

SABATOGE. watch your back, carnali!!

jk. i know you weren't trying to sabatoge my life, Snuffy.

guess what, you can't leave me alone like this! I've spilled woolite all over the bathroom floor, lost my photo ID, melted a spatula (therfore ruining the spatula and the pan) and the toilet is still broken. Also I'm running out of Oreos and I think yours might be stale/dusty.

great info. Will be useful for all. Keep posting .
Hair SpecialistIn Bangalore

Hello, I want to have one of these piercing models, but I am unsure. Can you look at it?