Today's Topics: The party for that fantastic/horrific building "BLUE", The SHARE benefit at Chelsea Piers, The fact that tonight at the 34th street subway station, "Gereldine,"** the fiancé of my ex, "Randolph,"** introduced herself to me, said she recognized me from the marie claire article (which, for the record, she totally disapproved of), and then after five minutes of painful conversation said "Well, this is awkward, I should go" as if this situation of HER DESIGN that I just described isn't like, OBVIOUSLY THE EPITOME OF AWKWARD?!!! God. I avoid people I KNOW, let alone people I'VE NEVER MET BEFORE who have like, slept with my future husband. Of course, at this rate, I'll never have a future husband. Nor will I ever live in BLUE, but that's because it reminds me of the tile in the showers at the Ann Arbor YMCA.

So I have this theory about New York, like about how it's impossible to really do anything? I mean, you've gotta make some cuts somewhere. This is actually a pretty complicated theory with a lot of geometric shapes involving the complex relationship between time and life (despite what we were told as children, those two things do NOT work well together). I'll describe the specifics another time (there it is again, TIME, that bastard!), like maybe this weekend. But for now:

In the past, when I "went to work a lot," I took my cutbacks in the Social Department. This was easy because it's hard to get me out of the house; I don't like other people, I usually lived somewhere around Calcutta, I'm generally riding the wave that is Chase Overdraft Protection and my window of fun-drunk time (anchored by sober time on one end and tired-drunk time on the other) is pretty small; we'll say about 3 hours max. Now that I'm mostly "working from home," I feel like I'm making that "going to work" cutback and so I need to amp up the Social, and also I'm really into these things:
1. Free drinks ("free" also means that I'm someone's "date" to a "not free" event, like the cruise)
2. Excuses to wear Outfits
3. Events where there might be photographers or the Snapple Lady.

SHARE had really great wine and food (though I couldn't really eat while double-fisting a POP champagne mini-bottle and a glass of wine), and Haviland Stillwell was one of the celebrity "sous chefs," which meant that she smiled next to a table of amazing cupcakes and looked talented and well-dressed while I got drunk. Since this is a great organization that does wonderful things for women with breast cancer, and I did meet the Snapple lady there, I can't really make fun of it. But I CAN SAY that the wine was so good that on Ninth Avenue, before dropping me and Hav back off at home (and by that I mean Hav's home) Karen parked her BMW, turned up the tunes and she and I did the twist in the street like we were in "From Justin to Kelly." It was HOT.

Stephanie works at Corcoron (not to be confused with the "Stephanie" on the Corcoran website who you ought to contact if you'd like to live inside a mosaic) and so we went to the Blue Bash to get drunk. Some genuis party-planner decided to make mojitos for the masses of clamoring people, like, with fresh limes, and we had to wait in a huge mass of men in royal blue shirts and messenger bags and young ladies (who were basically on another ozone level since Steph is 5'9 and I'm 5'10) while the bartender like, basically went to Mexico, started a lime farm, grew a bunch of limes, and then squeezed them into our drinks individually along with peppermint she grew out of her ass while we were all aging and not aging well.

We played the drink tables like a game o' roulette and by the time they ran out of drink, we were good and likkered up. 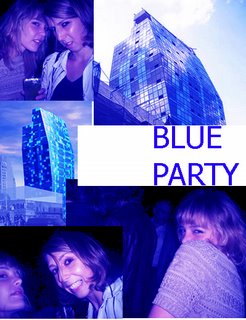 Then we found out there were no bathrooms. (Full disclosure: the building is not completed. There are also no walls.) Because if they put bathrooms there, people would get them confused with the windows since the windows look like shower curtains. So we went to my second-favorite architectural monument: 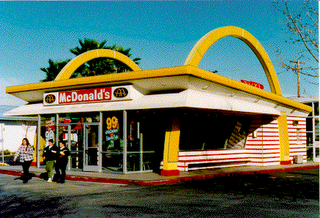 Back at the party, everyone was done imagining what their lives would be like if they could afford to buy an apartment (this is how things work in my fantasy life where everyone is as poor as me). Stephanie and I were long gone, Cool, Drunk and only out the .99 cents we had to pay to get fries to use the bathroom. This was the scene we left behind for grease and urination: 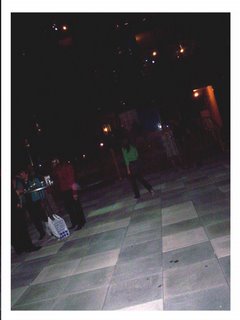 I sometimes ponder the question of time and is it enough or maybe there's too much and why, exactly, do we have as much as we have and what, exactly, is wasting it and why don't we get to know? time induces headaches. But it sounds like a fun night.

a good way to help my headaches is with more caffine, which is another way i tryo to fight time. this is the thing i just figured out: if you free up "time" to "do things," you'll discover there isn't enough time. which makes me want more coffee.

we are so hot right now

Who is the random hot comment from? I love this posting for so many reasons...I would have loved hanging out with your dad - (and also - part of shabbat is about being with people who make you feel good and closer to G-d - and i mean, YOU certainly make me feel that. so there! what could be more holy?)

2. it's also hillarious that stephanie, who's commenting skills are on par with yours (see #1), posted anonymously before she figured out how to use her name.

3. if you think this will ever stop me from reminding both of you to comment and often, you are so, so so wrong!

actually I knew I could use my name, I just didn't want to, thanks! SEEEEEEEEEEEEEE